Lately, I’ve been thinking about what it means to be a good writer. I’ve been working at a local newspaper since May 2018, and some of my favorite stories published in the paper – both written by myself and other reporters – are the ones that required some sort of vulnerability, either from the author or the subject.

My favorite pieces of writing aren’t shallow, meaningless words that just talk about the goodness of the world and ignore all the bad parts.

Ever since I became interested in books and short essays or stories, the words that meant the most to me were the hardest to read. And ever since I started writing, the words I felt the proudest of required me to be the most vulnerable. Because of that, I’ve neglected to post some of my more vulnerable essays on this website.

I want that to change… if only slightly.

I wrote the following essay, “What Ned Vizzini Means to Me,” in December 2017 as a college admissions essay. I never published it anywhere else, online or otherwise, not because I wasn’t proud of my writing, but simply because I wanted to keep my guard up.

But as I state in my essay, and as I still truly believe, the most meaningful writing requires vulnerability. If no vulnerable writers existed, I don’t think good writing would ever be published.

Good words can change the world. If just one person is ever inspired by my own writing in the way I have been inspired by Ned Vizzini and other authors, then I’ll have already won.

What Ned Vizzini Means to Me

If you’d like to know, here’s my story: I was never diagnosed with depression. I didn’t want to see a doctor. I thought I could handle it on my own. I didn’t want to talk to an adult about my feelings or lie on a couch to discuss my problems or take a pill just to feel okay.

I was never clinically diagnosed, but when I was 13 years old, people looked at me and said, “You look really depressed.” I looked down at my shoes in reply.

And I guess I probably was, even though I’ll never know for sure. I still don’t really know if I was just experiencing that stereotypical teenage angst or if I actually could have benefitted from seeking help. But I do know that most of my early teenage years were wasted feeling like hell.

When I was 13, there were three things that helped me feel something vaguely resembling happiness amid all the incessant misery controlling my thoughts and body and mind.

First, listening to music made me halfway happy. Not just any music, though. Music with a purpose, as I liked to define it. I didn’t enjoy all the hollow pop songs that cluttered the radio, so I searched the Internet and found musicians who sang about things I thought I could relate to. They sang about pain, about heartbreak, about loneliness. I found myself dancing to clever beats while singing along to lyrics that echoed my inner demons.

Writing made me almost happy, too. I had this journal, a spiral-bound, wide ruled notebook with a black cover. In this notebook, I wrote down all the thoughts that clouded my mind and sketched out all the images that engulfed my brain. Writing didn’t make my problems go away – not even a little bit. But with every word I wrote in that notebook, the hell in my head became something more tangible, something I could see and speak and scrutinize. The hell I felt became words I wrote, and within those words, I found myself realizing there lived a small glimmer of beauty among the pain. 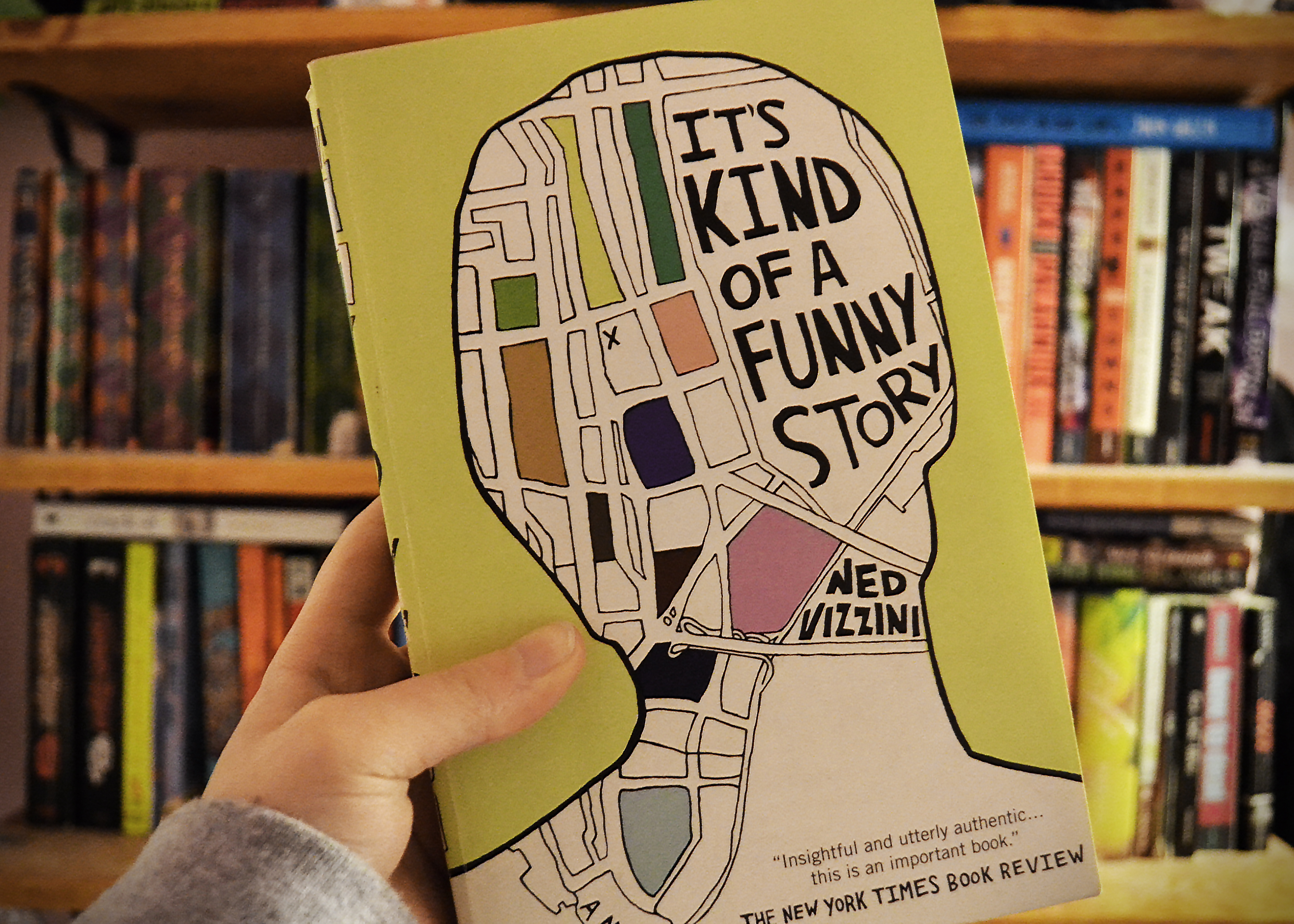 I read a book called It’s Kind of a Funny Story. The novel revolves around Craig Gilner, an overly ambitious and clinically depressed teenager living in New York City. To begin the book, Craig explains to readers: “It’s so hard to talk when you want to kill yourself. That’s above and beyond everything else, and it’s not a mental complaint—it’s a physical thing, like it’s physically hard to open your mouth and make the words come out. They don’t come out smooth and in conjunction with your brain the way normal people’s words do: they come out in chunks as if from a crushed-ice dispenser; you stumble on them as they gather behind your lower lip. So you just keep quiet.”

So, right from the start of the book, Craig is in pretty bad shape. He’s feeling depressed, seeing a shrink, and taking Zoloft. None of his friends understand his troubles and when he tries to talk to his parents about it, they don’t really get it, either. And he puts so much pressure on himself to get good grades, to overcome his depression, to be normal.

When I was 13, I wasn’t diagnosed with depression, I wasn’t seeing a shrink, and I wasn’t taking antidepressants. I guess it seems like I didn’t really have too much in common with Craig, but despite our superficial differences, I connected with Craig. I found myself in that book. Craig’s thoughts mirrored my own, and that helped me realize that I wasn’t as alone as I assumed. Reading about Craig’s life didn’t make my own problems go away, but it made me realize that my problems were shared by other people (albeit, in this case, fictional people). So, Craig’s story gave me hope.

As the book continues, Craig thinks he gets better. The Zoloft starts working. So then, thinking he’s cured, he stops taking his medication. And then he gets worse. And then one night, he decides to kill himself. He’s had enough. Craig tells readers, “I’m going to do it tonight. This is such a farce, this whole thing. I thought I was better and I’m not better. I tried to get stable and I can’t get stable. I tried to turn the corner and there aren’t any corners; I can’t eat; I can’t sleep; I’m just wasting resources.”

So he decides to jump off the Brooklyn Bridge in the middle of the night. Before he leaves, though, he calls the suicide hotline. The person on the other end of the line tells him that it will be okay; things will get better. They tell Craig to go to the hospital. So, instead of biking to the Brooklyn Bridge, Craig bikes to the hospital in the late hours of the night. And then he checks himself into a mental ward.

The story continues to develop during the five days Craig spends in the hospital. Throughout those five days, Craig talks to doctors and patients about his own problems and what can be done to alleviate those problems – not cure them, not necessarily, but make them more bearable, more controlled.

This story meant a lot to me when I was 13. And it still does. The book shows me that sick feelings aren’t permanent. Depression doesn’t last forever. Things will eventually get better.

After the story, an endnote within the novel states, “Ned Vizzini spent five days in adult psychiatric in Methodist Hospital, Park Slope, Brooklyn, 11/29/04—12/3/04. Ned wrote this 12/10/04—1/6/05.” Ned Vizzini, the author of It’s Kind of a Funny Story, was inspired to write the novel after he was admitted into a mental ward for five days – much like his character, Craig. And, much like Craig, Ned was diagnosed with depression and was prescribed medication. Just like Craig, Ned battled with mental illness and suicidal ideation and won – he won so well that he used those struggles to write his novel, to further his career. He didn’t let his mental illness control him. Instead, he used his experiences to instill hope, to inspire others.

But then again, maybe he wasn’t.

But sometimes, I guess, you can win a battle against your demons and still lose the war. So now I’m just left wondering – what’s the point in fighting?

Books have the power to shape minds and change lives. When I was 13, Ned Vizzini’s book changed my life – even today, it is still changing my life.

Ned Vizzini taught me that… yeah, okay, I admit it – I can still lose the war. But I need to keep fighting because my story only ends when I do. I need to keep writing my story.